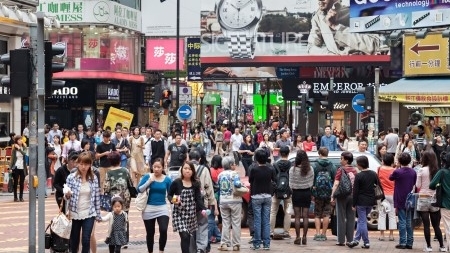 As Chinese shoppers trickle back to tourist hotspots for the Lunar New Year holidays, malls from Macau to Bangkok aim to lure them into stores with red lantern displays, special dances to mark the Year of the Rabbit - and discounts.

The overall number of international flights from China is still just 12% of pre-pandemic levels due to slow capacity increases. But retailers in popular Asian destinations are desperate to take advantage of the return of a first wave of Chinese tourists as the country reopens borders after three long years of COVID-19 curbs.

That's because Chinese customers have been a much-missed mainstay of the world's retail and travel industry: Their spending on travel had grown to $255 billion in 2019, before the pandemic, and accounted for 33% of spending in the global luxury personal goods market, according to estimates from Bain.

"We're definitely seeing an uptick in traffic across both the gaming and retail side of the business," said a Macau casino executive, who was not able to be named due to company policy. "It's extremely uplifting after three very sad years and has provided a morale boost to everyone within the resorts as well."

The Indian government may offer low-cost credit to small retailers and ease some rules governing the sector, two officials said, as Prime Minister Narendra Modi moves to shore up a large voter base that is losing business to e-commerce giants.

The proposal, which could be announced next month in the last full budget before the 2024 general election, aims to revive growth in the smaller physical retail sector which has been hit by the entry of companies such as Amazon, Flipkart, Tata Group-backed BigBasket and Reliance Industries.

“The government is working on a policy through which easy credit can be made available at low interest rates. Affordable and easy loans against inventories is one of the options,” a government official, who declined to be named, told Reuters.

The commerce ministry did not reply to a request for comment.

Richemont and Burberry Group said consumer spending in China is already rebounding after three years of pandemic lockdowns and a virus surge that cost the luxury goods makers almost a quarter of their sales there last quarter.

Demand for luxury goods in China — the industry’s biggest growth engine — was muted by continued Covid-19 restrictions for much of last year. The abrupt end to the government’s Covid-Zero policy is prompting optimism about a V-shaped recovery as the infection surge that kept consumers and store employees at home in December abates.