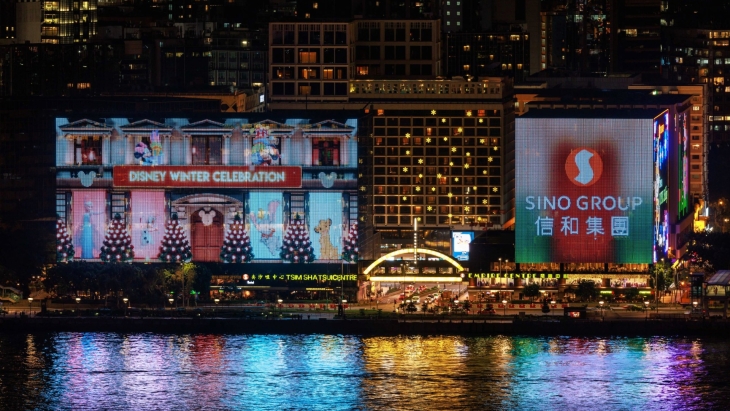 “Disney Winter Celebration” was not simply a Christmas campaign; it created multiple destinations around town for locals to spend their winter holidays, when the COVID-19 pandemic made it nearly impossible to travel abroad.

Spanning 7 of the city’s most popular retail venues, the campaign was a major collaboration between Sino Group and Disney+, whose launch in Hong Kong in November 2021 was highly anticipated and helped shed the spotlight on the campaign.

It was in fact the first time Sino Group had synchronised the display of the launch video on the facades of 3 of its strategically located properties, which generated a reach of over 5 million residents. The campaign also saw Hong Kong’s first-ever light installation featuring characters from 4 Disney+ brands (Disney, Pixar, Marvel, Star Wars) on a single medium which was set up between Tsim Sha Tsui Centre & Empire Centre facing Victoria Harbour, a popular area to view Christmas lights. The festive lighting activation created a buzz and served as a publicity boost for the campaign.

Citywalk (a flagship district mall located in Tsuen Wan) catered to Frozen fans with abundant themed photo spots including an icy palace with an infinite mirror room, a 4-metre-tall Olaf-themed wish-making tree and statues of Queen Elsa and Queen Anna.

Andrea Leung, Group General Manager (Marketing) of Sino Group, said: “We are thrilled to have partnered with Disney+ to curate Hong Kong’s first-ever joint-mall Christmas party featuring characters from all 6 iconic Disney+ brands last year. We are especially happy to have brought positive energy to the community through the cheerful Disney-themed campaign, which created perfect holiday destinations for families in a time when travelling was not possible. The photo-worthy installations also drove up footfall to the participating retail venues by a significant 35% year-on-year.”

“Through the campaign, Sino Group was also eager to support its retail and F&B tenants and help them ride out the storm caused by COVID-19. Rolled out around Christmas, traditionally a peak shopping season, ‘Disney Winter Celebration’ provided them with opportunities to generate business. On a year-on-year basis, the businesses of retail tenants and F&B tenants at the participating venues increased 25% and over 70% respectively.”

The exceptional results, and the positive ambience created by the joyful Disney-themed programmes for the local community in a gloomy, COVID-struck time, were what impressed the jury and earned the campaign the prestigious award.

The 17th Retail Asia Awards is presented by Retail Asia. To view the full list of winners, click here. If you want to join the 2023 awards programme and be acclaimed for your company's outstanding retail initiatives, please contact Jane Patiag at [email protected].