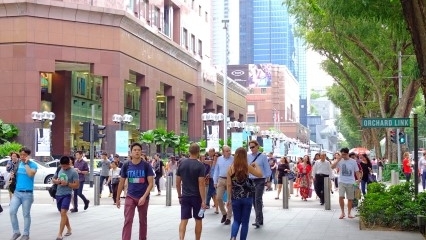 Chinese travellers have played a considerable role in the luxury end of the city’s retail market.

A projected return of mainland Chinese travellers after the easing of travel restrictions in the east Asian country is expected to boost the luxury retail sector in Singapore, a key global centre for luxury shopping before the COVID-19 pandemic, according to a Fitch Solutions report.

Singapore's retail market has traditionally been supported by high domestic household incomes and spending, with spending by travellers, including those from China, playing a considerable role in the luxury end of the retail market, the report noted.

“The luxury market is particularly important in Singapore, with a large number of global luxury retailers present in the market (taking advantage of Singapore's status as a global financial centre, and its appeal as a travel hub for international travellers),” Fitch said.

Fitch projected an uptick in Mainland Chinese departures in 2023, but they are not yet expecting volumes to return to their pre-pandemic levels.

Recovery of the tourism sector in Asia is expected to be slow but steady in most Asian markets, including Singapore, as tourist arrivals and active airline flights in Asia have yet to reach their 2019 levels and remain weak by global standards, the report noted.

This was blamed on travel restrictions in many Asian markets that were rolled back in a more cautious and phased manner when compared to other global markets globally.

“In Singapore where travel restrictions were lifted in April 2022, comparably earlier than its South East Asian and wider Asia-Pacific region peers, the market's recovering tourism industry is still held back by the absence of outbound travellers from Mainland China,” Fitch said.

However, Mainland China has announced that they would be relaxing COVID-related international travel restrictions, and authorities have begun issuing new passports for Chinese travellers to leave the market and quarantine measures will no longer be enforced.

The global response to the return of international departures from China has been mixed, though most markets are keen to welcome back Mainland Chinese travellers, who have traditionally been large spenders, particularly in the retail and tourism service sectors, Fitch said.

However, domestic pressures and concerns have seen several markets such as the US, Japan and South Korea implement precautionary measures, which mostly consist of negative PCR tests prior to arrival or PCR testing upon arrival, Fitch said.

“While this is expected to provide negligible deterrence towards most Mainland Chinese visitors, it is an additional requirement which may encourage some travellers to visit markets without any extra restrictions,” the report added.